An Awkward Inheritance – A Play By Elise Maurine Milner

The hit Off-Broadway about Northern Nevada makes its way to the Piper’s Opera House stage with, An Awkward Inheritance – A Play By Elise Maurine Milner.

Written and directed by Milner, a New York City-based playwright, producer and director, she grew up in Virginia City before founding her own theatrical production company in 1999. Over her career, she has produced 15 fully-staged Off-Broadway original plays and musicals reaching a cumulative total of 300 performances. This is the first time she’s brought her talent back to her hometown.

An Awkward Inheritance is a dramatic, comedic play written in appreciation of, and to celebrate, the unique community where Milner was raised.

This hilarious and heartwarming play begins with Mabel Kane, a spunky, adventurous, woman of mystery and notorious community leader of the very small, and fictional, town of Roundhouse, Nevada, who has just died. Her three, grown, estranged and dysfunctional children fulfill Mabel’s wishes and demands for her lucrative estate.

Hoping to cash in and run, her children, Marigold (a married therapist), Jadge (a drifter) and Thelma (a DMV teller) are shocked to learn the real truth about their mother, her life and their fate in fulfilling her wishes. When the complexity of Mabel’s entanglements within her businesses and the community is revealed, no one will ever be the same. Will her children come together and use their grief and motivation to finally learn to get along and grow up themselves? As they all consider abrupt new life changes within the terms of Mabel’s conditional inheritance, what will happen when a family that struggles to find anything in common emotionally or otherwise has to work together on a hilarious and drastic new life path – something that will change each of them forever?

This new play is littered with fascinating, lighthearted and, sometimes, even heartbreaking moments and perspectives of true life in a small town and its larger-than-life characters.

Cost is $30 for general admission or $150 for premium Box Stage seating that includes four seats and a bottle of wine.

**Running time is 2 hours with one intermission. No refunds, but you may exchange tickets for performances. An email confirmation will be sent upon purchase.

**VIEWER DISCRETION IS ADVISED for language, and sexual adult themes. NOT RECOMMENDED FOR CHILDREN UNDER 17 YEARS OLD

Sponsored by the Silverland Inn and Suites. 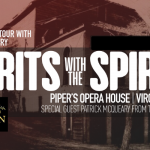 Country Dancing with DJ Jeremy
Join our E-news
Sign up to receive the latest news,
event information and deals before anyone else!
JOIN